Caylee Anthony - Missing Child
On June 16, 2008, Casey Anthony left her parents home, where she had been living with her 2 year old daughter, Caylee. For a month, Caylee's grandmother, Cindy Anthony asked  repeatedly to see her granddaughter. Casey made many excuses to Cindy as to why she couldn't . A month later on July 15, Cindy Anthony reported the mother and child as missing to the Orange County Sherriff's Office. The next day, Casey Anthony was arrested and quickly charged with neglect of a child, giving forth false statements and obstruction of a criminal investigation. It's obvious Cindy Anthony had been in touch with her daughter at different times during that month. Cindy hadn't seen or talked to the baby, but she had to have had some kind of contact with Casey for her to give her mother the run around. And with the missing persons report on the 15th and Casey's arrest the very next day, one would think Cindy Anthony had some idea of where her daughter was...

Sheriff's Office Initial Investigation into Caylee's Disappearance
Apparently, Casey Anthony's explanation of her daughters whereabouts didn't satisfy Detective Yuri Melich. Long story short, Casey was uncooperative and lied about the child being with a nanny. A nanny no one in Casey's family or circle of friends had ever heard of or seen. Casey hung out in jail for a month and when her $500,000 bond was posted, she was released.
A week or so before her release, someone reported suspicious things in a wooded area near the Anthony home. In December, more reports were filed and more objects found which were then identified as Caylee Anthony's remains. The death was considered a homicide but no cause of death was listed. Two different sets of suspicious objects were found months apart. What's up with that? A thorough search of the area didn't reveal the second set of stuff? Some reports say the area was filled with brackish water the first time around, making the objects impossible to find. I find this hard to believe.

A Life of Crime?
Meanwhile, Casey Anthony was on the street. Between the end of August and the middle of September 2008, Casey Anthony was arrested  twice more on charges such as petty theft, using someones else's credit cards, identity theft and forgery. At the beginning of September, Casey was offered a limited immunity deal,  but didn't accept it. I'm wondering what she was doing. Witnesses have her out drinking and dancing and living it up. Could be she was in trouble with some unsavory types, folks who might hold her child hostage while they pimped Casey for various unknown reasons. Gambling debts? Loan sharks? Drug deals gone bad? Maybe Casey left that baby in an unsafe place, to simply go out and party and when she returned, something had gone horribly wrong. Maybe when Casey went back to collect her daughter, she found the child had been harmed and had died.

Casey Anthony on Trial  for Murder
In October 2008, Casey Anthony was indicted  by a grand jury for 1st degree murder, aggravated child abuse and aggravated manslaughter. Prosecutors also charged her with 4 counts of giving false information to police. Later, the abuse charges were dropped, because the prosecutors believed Caylee to be deceased. Casey Anthony's trial for the murder of her 2 year old daughter began in May of 2011 and has lasted more than 40 days. On Saturday, June 25, 2011, the judge called an abrupt recess until Monday June 27. It came to light this morning that Anthony's defense team filed a motion to determine her competency. Apparently, the defense feels Casey is unable to aid in her own defense. So after the judge called for the recess, three state psychologists spent Saturday and Sunday evaluating Casey and found her competent to continue. Speculation is running high as to why the defense would ask for a mental health evaluation at this time. If  the defense was able to get her deemed unfit to continue, that would halt the trial for an undetermined period of time. Later, if Casey was ever deemed fit to continue, the trial would begin anew and wipe out all the damaging remarks and claims made by the defense in the opening statements of this current trial.

Casey Anthony Isn't Known for Truthfulness
I don't think we'll ever know for certain to what extent Casey Anthony was involved in the death of her child. But I do believe she knows what happened. I think she knows what happened and for some ungodly reason she refuses to tell. Casey Anthony has never given a straight story and she's been caught in lies time and again.   She is the product of our privileged yet permissive American society, where everything is okay and people  do and say what they like. Casey Anthony will never tell what she knows because if she cops to anything, then they've got her. If one never makes an admission of guilt or knowledge, then others will have a harder time proving any wrong doing. Once a person says "I did it," or "I know it," then they must be held accountable and pay. But if one never admits it, they have a better chance of not being held accountable. And that what it's all about isn't it? Getting away with stuff because you can, right? Getting away with lying, cheating, deceit and murder have become commonplace. Look at OJ...
at 7:25 PM 1 comment:
Email ThisBlogThis!Share to TwitterShare to FacebookShare to Pinterest

I Think I'm in Love with Peter Dinklage...

HBO has just finished airing the new series "Game of Thrones." Over ten roughly hour long episodes, Game of Thrones has introduced me to a bevy of characters jostling for wealth, power and blood. Some of the characters jumped out and grabbbed me by the throat, thereby demanding  attention. Others are less physical, wily and quietly command me to notice. Peter Dinklage plays such a character.

I first noticed Mr Dinklage in "The Station Agent," a wonderful movie with great character studies. He plays along with Bobby Cannavale and Patricia Clarkson. I think I may have almost as big a crush on Ms Clarkson as I do Mr Dinklage. But Mr Dinklage has a huge presence in The Station Agent and delivers an understated yet very powerful performance as Fin McBride, a decidedly withdrawn man who is forced into friendships he doesn't solicit. I loved Fin McBride form the moment I first laid eyes on him and that love carried over to Peter Dinklage.

I knew nothing of Game of Thrones when I tuned in to the first episode back in April. I didn't have any clue as  to who played the starring roles, or what the story was about. Big Love had ended its fifth and final season and I was sad and lonely for my friends in Sandy. The loss of Nikki Grant was overwhelming. I had no idea how I would spend my Sunday evenings after that. But the Starks, The Lannisters and the Targaryens quickly soothed my aching heart and took me in.

I'm a sucker for stories about people and their relationships and Game of Thrones paid off rather well. Peter Dinklage plays Tyrion Lannister, the third child of a powerful man, but he is different than everyone in his family. Where they openly seek power, Tyrion seemingly seeks only to please himself.  His strengths are his intelligence, education and a good head for politics. Tyrion does possess a scathing wit and has somewhat of a mean streak for people he considers enemies, but his strengths are not valued by his family. And because of that he has largely taken to whoring and drinking. There is something else though, he actually makes important connections with two members of the Stark family who are also hurt in one way or another. Tyrion Lannister actually holds a place in his heart for other sufferers and in his own way, has helped them immensely.

I'm not sure another actor could have pulled this off. Peter Dinklage has given me part of himself in playing this role. Part of him has actually transcended the fourth wall and come in to my home and crawled into my heart. As Fin McBride or Tyrion Lannister, Peter Dinklage has stolen a huge part of my heart.
at 7:08 PM 2 comments:
Email ThisBlogThis!Share to TwitterShare to FacebookShare to Pinterest

This is a Sponsored post written by me on behalf of PBM Products for SocialSpark. All opinions are 100% mine.

In the past 3 months, 7 of my friends have given birth. Each one of these kids is blessed with conscientious parents who know a good deal when they see it.  I know each parent will not want to miss a great opportunity  to feed their kids bodies with the best foods available. These parents are also forward thinkers. They will also want to feed their kids minds when the time comes.

Wal-Mart's Parent's Choice Infant formula is not only a healthy way to give kids a good start in life, but  a way to look ahead and start planning for the future. Parents can enter a sweepstakes to win a $10,000 college scholarship. Parent’s Choice Infant Formula Savings Sweepstakes launched in June 15, 2011 and will run through August 1, 2011.

Please share this with anyone you know who has a baby or is expecting. Feeding a child's body and mind is a good way to reach toward the future!

at 6:01 PM No comments:
Email ThisBlogThis!Share to TwitterShare to FacebookShare to Pinterest

I Thought They Went to Disney World... 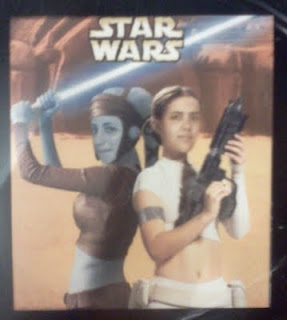 ...seems they went to a galaxy far, far away!
at 8:37 AM 1 comment:
Email ThisBlogThis!Share to TwitterShare to FacebookShare to Pinterest

Walgreens: Helping People in Your Community...

This is a Sponsored post written by me on behalf of Walgreens for SocialSpark. All opinions are 100% mine.

A month ago I strained a muscle in my lower back moving plants from the greenhouses to the shop. It's not far, but when one has to do this repeatedly, it can be painful. I consulted my sister Pauline, who is a triage nurse for a busy doctors office. Her recommendation was to rest, relax and take a pain reliever and anti- inflammatory medicine. Walgreens is on my way home, so I stopped there to shop the pain relief aisle. I chose one of Walgreens Brand Health & Wellness Products,  Ibuprofen Softgels Liquid Filled Capsules.

I usually choose the name brand, but after talking to the pharmacist,  I took the Walgreens brand because it was way cheaper than the other. Steve told me the ingredients are exactly the same as other national brands and  recommended the Softgels for quick relief. Over the counter medication can be expensive and I appreciated the very good price I paid for the Health and Wellness Brand Product from Walgreens.

In addition, some of my blogger friends are hosting giveaways! You could win one of 20 $50 Walgreens Gift Cards! To enter, check out some of the blogs and leave a comment on your favorite post about a Walgreens Brand Health and Wellness Product. Then just Tweet about that blog post and Walgreens and you're in the running for a prize!

My muscle strain has eased and I can thank Walgreens Ibuprofen softgels. I'm happy with the pain relief and the price. But I am truly thankful for the kind and helpful pharmacist at my local store, who took the time to talk to me about what was available, correct dosages and uses of the product. Thank you Steve! You helped me feel better!