In all of the excitement that has come with moving to Atlanta, I have also found that there are adjustments that I have to make in order to live with two new roommates. I worked through the irritation that came when I found that my roommate Bethany and I woke up to shower before work at the same time everyday. I’ve gotten used to wiping down the stove and counters when I’ve literally never cooked in this house. I am in the process of learning to live with the television habits of my roommates. We subscribed to EXPERTsatellite, which offered us a plethora of channels and shows to choose from. I am not at all exaggerating when I say that my roommates’ and my taste in television are at opposite ends of the spectrum. I watch television for the primary purpose of being well-informed. I stick to CNN, Current, and C-SPAN. Bethany enjoys watching reruns of any types of sitcom, canned laughter and all. Susan watches only reality television, her favorite of which is Jersey Shore. It seems as though we’ve got a long road ahead of us, and we are currently exploring the idea of buying a second television.
at 12:14 PM No comments:
Email ThisBlogThis!Share to TwitterShare to FacebookShare to Pinterest

This post brought to you by Hills Pet Nutrition. All opinions are 100% mine.

Here at home, we've all gained a little weight over the last couple of years. It's definitely cut down my own mobility and our dog Penny suffers from decreased mobility as well. Penny also suffers other challenges, but she loves to walk and her mobility issues hinder her daily constitution. I've decided we are going to take the Hill's Healthy Mobility Challenge over the next 30 days.

Hill's Pet Nutrition was formulated to help dogs live an active life. A dog of any age can suffer mobility problems from joint pain or flexibility problems. In fact, 1 in 5 dogs suffer these maladies. Many people assume this is an unavoidable sign of aging. But early detection and awareness are the first steps to helping your dog age gracefully, with greater mobility and activity. If you notice your dog having a hard time getting up, or is slower on walks and doesn't recover from exercise very easily, your pooch may be suffering the early signs of joint health issues.

Hill's Science Diet Healthy Mobility Dog Food can help you get your dog back on track in 30 days. It has ingredients proven to help dogs with mobility. I am going to give it a try. I registered to receive  Hill's Healthy Mobility Coupon for $30 in savings. Penny really misses her walks and playtime and I want to do what I can to get us both back in shape. If you register now, you are also entered into a sweepstakes and 30 winners will win free pet food for a year!

Hill's Pet Nutrition on Facebook is a good place to read stories of other pets getting back in the game and living a healthy, more mobile lifestyle. Check out this link http://bit.ly/nh5LiQ, to learn more about healthy food for your pet.

at 5:00 PM No comments:
Email ThisBlogThis!Share to TwitterShare to FacebookShare to Pinterest

Well, Eugene has been here just over three weeks now. He is settling in very nicely, gaining back the weight he lost when he was lost and endearing himself to everyone in the house.
Last week our little neighbor, Anita, came over. She is almost as cute as Eugene and she loves him too. Sometimes too much. The day Anita was here it rained, so we played inside. Eugene and Nelle tried to hide were sleeping in a box of socks, but Anita found them woke them up. 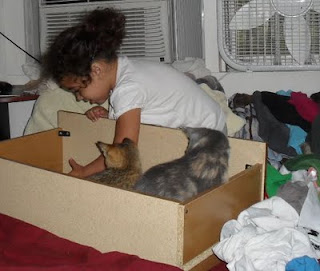 Anita took all the socks out of the box much to the horror excitement of Nelle and Eugene.
Penny tried to get in on the game and found she was too big for the box. 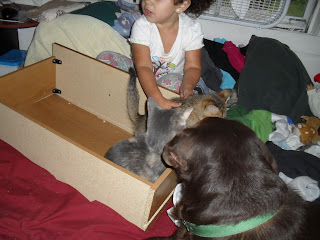 Eugene tried to escape play a new game, but Anita insisted he play
"stay in the box". Penny and Nelle looked on in horror with great amusement. 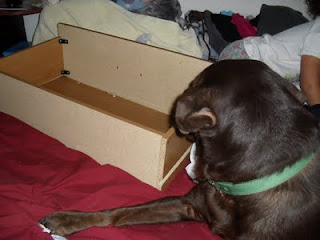 In the end, only Penny was left. She was blamed for messing up the socks.
at 5:16 PM 3 comments:
Email ThisBlogThis!Share to TwitterShare to FacebookShare to Pinterest
Newer Posts Older Posts Home
Subscribe to: Posts (Atom)