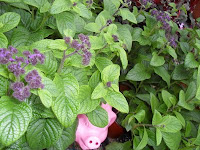 I just saw Shawn come out of his room with a large pink piggy bank in his hand. He says he's going to count up his life savings and buy a new  flat screen tv. I asked if there was anything wrong with the tv he has now. "Nothing wrong with it." says he. " I just want the space that old bazillion inch tube tv is taking up in my room."

I can't argue with that. Shawn resides in the smallest bedroom in the house. He can barely fit his bed and alarm clock in there. "After I get my new tv straightened out, I'm going to check out Direct TV packages at www.localtv-satellite.com." I said I think he's going to need more than a piggy bank to get all that done!

Now that I'm thinking about this, I think we may need to secure the house a bit better than we are now. With a giant flat screen in his room, potential robbers could see that tv from the street and get some shady ideas. I think I'll mention home security kalispell when Shawn comes back. There may be something left in that piggy bank to fund a security system. At any rate, I'm sure Shawn won't want to rely on the dog to protect his new tv!
at 3:33 PM
Email ThisBlogThis!Share to TwitterShare to FacebookShare to Pinterest