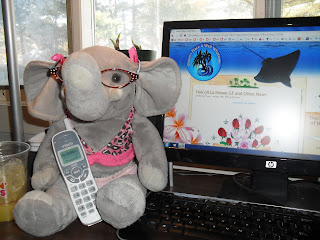 But Ella doesn't know Thom's number!
She's a card that Ella, and she's had a great adventure here in
South Eastern  Massachusetts!
When she woke me up banging on the grill and demanding food, I thought she was rather bold to disappear for so long. Then to refuse to explain before I put a plate down in front of her?
Well, let me say I was rather perturbed, but I acquiesced.
After the feeding frenzy, this is what I got out of her:


Nothing!
She will not tell all! Now she wants cake!
I called Tam, she usually has some kind of cake.Tam says she won't be home for another hour.
So, we wait...
I did manage to wrestle my camera from Ella's grasp.
After looking through the snaps, I can see Ella has been busy and made some new friends.

One day last October, I went out to do errands. Ella climbed in with me and said she'd take the ride. We got up to the corner and with a giant screech, she jumped out the window and bolted. I didn't see her again for a long time. After going through the pictures she took, I have a good idea. 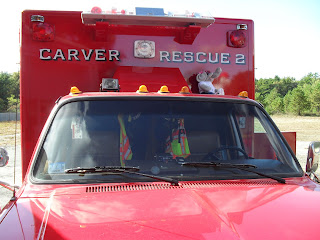 Each year the Carver Fire Department is holds an open house, a kind of outreach program, designed to educate kids and families about fire safety. The Fire Chief and Deputy Chief and a bunch of the fire fighters gather uptown with some of their equipment, a bouncy house and a few pizzas. 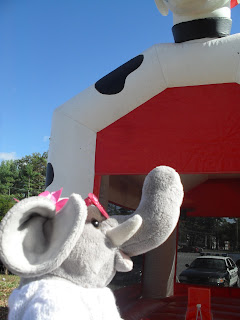 I see by this photo that Ella is eyeing the bouncy house! I don't see any kids in there so she must have chased them all away...
During the open house, the fire department showcases some of their equipment and they do demonstrations not only with their fire equipment  but with the devices they use to rescue people from water and auto accidents too. The firefighters wear their fire suits and engage kids in a discussion about why the suit is so big and bulky, and why there is so much stuff hanging off it. 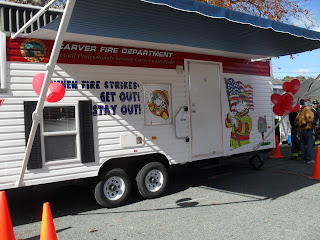 Fire safety and education is a huge concern of our fire chief and his whole department. The chief uses this simulator to teach kids and families the best way to escape a  smoky or burning building.  We see here that Ella made herself at home by climbing all over everything and asking a bunch of questions. 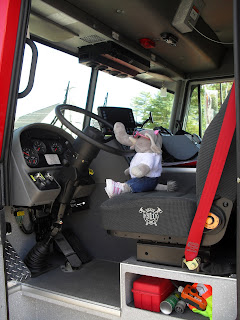 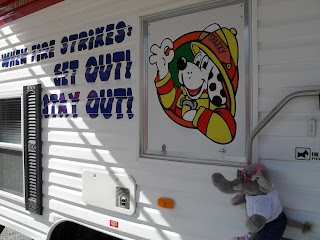 While looking through the pictures, I put a call in to the Chief. I thought he would be mad because an elephant hijacked his engine, but he said the idea of the open house was to engage people and create a dialog between the department and the folks in town. He wants to educate people, especially kids. Chief said in the years he's been doing the open house, he's had an excellent response from everyone in town, but he's never encountered an elephant. He told me he just asked Ella to behave and continued on with his next class.
I guess Ella must have cozied up to this guy. It seems he had some pizza and she decided it was lunchtime!
The hovercraft must have been of interest too, Ella got someone to take her picture! 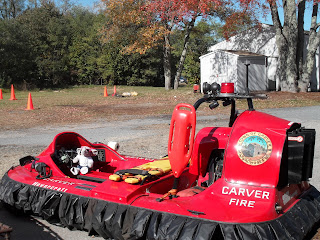 I haven't been through all the pictures, but I'm sure there's more. Once Ella gets some cake in her, she may be a bit more talkative...
at 3:29 PM
Email ThisBlogThis!Share to TwitterShare to FacebookShare to Pinterest