Hi and welcome to Wednesday Wickedness! We are like other memes in that we will ask you ten questions each and every Wednesday. But our little "twist" is that each week we will pick a famous person and pick ten of their quotes. Each of our questions will be based on the quotes. Got it? Great! Let's begin this week's meme! 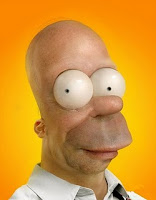 1. “Weaseling out of things is important to learn. It’s what separates us from the animals … except the weasel.”
What was the last thing that you weaseled out of?
Taking phone calls. I shut my phone off. Ha ha! Try to reach me now, Bill Collector!

2. “If they think I’m going to stop at that stop sign, they’re sadly mistaken!”
What was the last thing that caught your eye that you stopped for?
Cookies in Margaret's kitchen. Then I ate almost all of the peanut butter cookies, which she was saving for Jim.

3. “You can’t keep blaming yourself. Just blame yourself once, and move on.”
When was the last time that you blamed yourself?
Three seconds ago. But then I said "What the hell? What can I do about it?" And then I forgot about it.

4. “Here’s to alcohol, the cause of, and solution to, all life’s problems.”
Does alcohol play an important role in your life?
Not so much. I have a healthy disdain for alcohol. Sugar, candy, fried food, soda, that's my alcohol!

5. “All right, let’s not panic. I’ll make the money by selling one of my livers. I can get by with one.”
Would you ever donate a kidney or another organ to someone?
Depends on too much to say generally one way or the other.This is something I would decide on a case - by - case basis. And in each case, I say I keep my parts to myself.

6. “Bart, you’re saying butt-kisser like it’s a bad thing!”
Have you ever thought you were a butt-kisser?
Right.


7. “Everyone knows rock n’ roll attained perfection in 1974; It’s a scientific fact.”
What do you consider rock ‘n roll perfection?
Lou Reed -Rock 'n' Roll Animal. Heroin, glam rock, Hunter and Wagner. How do you get any better than that?

8.“Hey, he’s not happy at all! He lied to us through song! I HATE when people do that!”
How seriously do you take an artist’s lyrics?
Most times I can't even understand them. Take Bob Dylan for instance: just call him Mr Mumbles. Or Neil Young: Mr Monotone, I get bored listening. Then theres Perry Farrell: if one can even understand what he sings, they would have a difficult time putting meaning to his lyrics. Such a person would need to ingest a bunch of drugs to even try.

9. “If something’s hard to do, then it’s not worth doing.”
What was the last thing that you did despite the fact that it was hard?
I sat with my brother.

10. “The Internet? Is that thing still around?”
Can you imagine being in a time without the internet?
I was. I did more stuff then. The internet made me very lazy and anti-social.
at 4:40 PM
Email ThisBlogThis!Share to TwitterShare to FacebookShare to Pinterest