Dennis was a tall man with a very dark look about him. He had dark eyes that were almost black, and a thick black beard that covered most of his face. He hid most of his hair underneath a dirty looking tweed flat cap.  Dennis was a skillful assassin.


His cover was lowly pizza joint worker. In the joint he scrubbed pots, cleaned floors and maintained the equipment. From time to time he helped weigh out the dough and run it through the sheeter. He also stocked the beverage coolers and took in the deliveries. 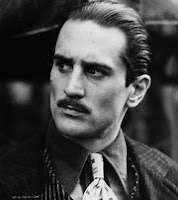 Dennis was a quiet man and kept to himself. He was polite to his employers and the other workers, he was patient and never raised his voice. The girls in the shop didn't like to be left alone with him, the guys kept their distance. No one ever said an unkind word to or about him. He liked it that way.


Dennis didn't use telephones. When it was necessary to contact him concerning wet work, the potential client would leave an ad in the lonely hearts column of the newspaper. The same ad was always used:

Slurpee Heaven
Me: 70+ geriatric quadriplegic with toe fetish.
You: hairy carny midget with hobbit feet.
WOLD 8250
Upon seeing this, Dennis would respond to the ad with a meeting place and time. Most often it was the dumspter behind the pizza joint in broad daylight. The meetings were short, with the client giving the details and Dennis naming his price. If both parties were in agreement, Dennis laid down the terms, pay me one week after the job is done or I do the same to you. Simple, quick, to the point.
One Thursday, Dennis had a meeting set for 11:45am. He shuffled out to the dumpster, lit up a Tiparillo and waited. From around the corner came a kid, a little nine or ten year old kid. Dennis listened to the kid's proposition. He had $47 and wanted Dennis to waste his math teacher and the lunch lady. Dennis said he didn't do two for one deals. The kid said just the math teacher would be fine, they'd talk about the lunch lady when he got his birthday money. Curious for the first time in his assassin career, Dennis asked why.
The kid, shame faced, explained the teacher had been giving him poor grades because he couldn't do long division and he had a hard time with the word problems. Dennis agreed the kid had a problem. Intrigued, Dennis asked about the lunch lady. The reason was simple. The kid felt she was a shitty cook.
Dennis made the kid an offer. He told the kid to go to the math teacher, explain his difficulty with long division and word problems and ask for help. After one week, the kid was to come back to Dennis and tell him what happened. After agreeing to these terms, the kid had one more question. What was he supposed to do about the lunch lady?
Dennis said the answer was easy, bring your lunch.
at 1:00 AM
Email ThisBlogThis!Share to TwitterShare to FacebookShare to Pinterest