Sad news for me today, HBO has cancelled LUCK after three horses met theirs deaths working on the show. I read some comments to a news article and naturally there are a lot of opposing views. I can't really get behind any of the attitudes expressed in that particular set of comments, but with the limited information I have at this moment, I can get behind the cancellation.

I did like LUCK. Very much so, actually. But I admit it wasn't for everyone. It had a slow start in ratings, and didn't gain many more viewers as the series progressed. There could have been many reasons for the lack of interest.

Horse racing is a very specialised sport. It does not appeal to the masses and the general public probably isn't aware of the real drama behind the scenes at a race track. LUCK did a good job showing us the different aspects of track life. So much goes into getting a horse to run on a track that we don't see. Many different professional people and a boatload of money go into making it all happen. Luck gave us a nice snapshot into the day to day life at one track in Southern California. The owner, the trainer, the groom, the veterinarian, the riders, the spectators and the bettors are but a few of the human factors that make horse racing. While the average person sees a horse, a rider and a racetrack, the bulk of the work of horse racing is done elsewhere. That's what HBO tried to show us. That and a nice little story to pull it all together. However, all of this may have been just too much for the average television viewer looking to be titillated and not expecting to have to think too much. 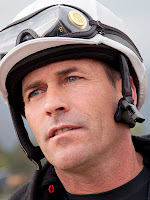 While watching LUCK, I had many, many questions. Those questions were what interested me in the show in the first place. Even still, I didn't look only to the show to answer my questions. I searched out the answers elsewhere. When I watched the next episode, the answers I found brought me to a new understanding of what everyone who worked on LUCK tried to show me. I admire those people for their work and I thank them for helping me learn things that aren't in my day to day view.

Producing  as show like LUCK is most definitely a costly endeavor. Low ratings would put the damper on any show with such a high production value. And that is the bottom line, isn't it? Anything costly, without a good return on investment is doomed, whether it be horse racing or a television show. When you add problems with production, big or small, those problems reduce the return on investment even further. Add some bad press and some activists and you end up with the axe. It's plain and simple.

I'll miss LUCK, but I would rather see it end before I'm ready, than go on for longer than it should.
at 8:36 AM
Email ThisBlogThis!Share to TwitterShare to FacebookShare to Pinterest