Has Rick lost his grip?

I don't read the comics and I have no idea how long its been since the Zombie Apocalypse. I'm guessing  about 5 or 6 months has passed. If I go by Laurie's pregnancy, maybe only 4 months. At any rate,would a prison or a theme park still be able to generate it's own power that long after the infrastructure failed? So what was that shining complex off in the distance? Does it have anything to do with the helicopter flying over Atlanta? We've seen schools and hospitals over run with walkers. A theme park may generate power independently. But, and this is a big but, would a them park be able to be fortified as Rick suggested? I think not. So that leaves a prison. Again, with the question of how much time has passed, would a prison complex be able to generate that much power and would it really be lit up like a Christmas Tree?

I noticed that the group as a whole began to question Rick's leadership. I think it may have been a mistake for him to declare that what they have is no longer a democracy. I don't see any of the others stepping up to the plate and taking the reins. Seeing that Herschel was willing to stay behind and take his chances on the highway, letting Rick and Carl go away on their own, leads me to believe he has no hope for his own future. Glenn has not shown much in the way of leadership qualities and neither has T-Dog. Who does that leave? Darryl. The things I noticed about Darryl is that he has stayed consistent in his views right along. He says he doesn't want anyone to rely on him, but he doesn't leave the group, allowing them to rely on him. Although distant, Darryl repeatedly steps up to the plate to do the nasty jobs no one else volunteers for. He is also the only one who has kept a cool head and a keen eye right through the whole mess. I suspect the group will try to lean on Darryl more, looking to him for guidance. I also suspect he will stand up for and with Rick in the next steps they all take. Darryl seems like a good sous chef. Not the head of the kitchen, but right there behind the Exec, backing him and everyone else up. I like Darryl. He seems to have a good heart and strong convictions. I also noticed he is the first one to jump in wherever he is needed and get done whatever needs doing. The group needs Darryl and he needs them as much as he denies it.

I don't believe Rick has lost his grip. I think he has only lost his emotional sensibilities. He is beginning to act like a real leader, who makes decisions the collective doesn't agree with and is willing to make sacrifices for the good of the group as a whole. Yes, he is getting mean, but I don't think this is a sign of weakness. He's made some decisions, like not telling everyone what he learned at the CDC, that don't seem to jibe with the democracy idea. But Rick is growing a thick skin. He's growing some cajones, and he means to get through the mess and bring his people along with him. He has taken ownership of these people, more responsible for them than ever before. 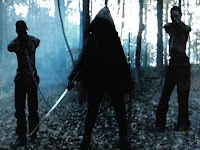 One last thing. What or who was that hooded creature in the forest that saved Andrea. He/it looked like something from Game of Thrones! Any way, that hooded creature had two walkers with their arms cut off on chains like dogs . That would certainly make them less dangerous, but what would be the benefit of keeping walkers like that?  No face or eyes were shown on the hooded creature, leading me to believe this was not a supernatural creature, but human. My guess is Merle. Remember Merle? Chaining up armless walkers like dogs seems like something he would be able to pull off. But I could be wrong.

What do you think?
at 12:06 AM
Email ThisBlogThis!Share to TwitterShare to FacebookShare to Pinterest