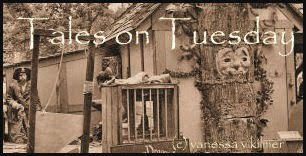 Roy wondered why no one spoke to him in the lunch room or sat with him during study period. In class he was quiet, but he raised his hand when the teacher asked for input from the students. When he climbed aboard the M-1 and flashed his bus pass, the driver looked straight ahead. Even his folks had become distant. Sometimes he could hear his parents discussing him, but it was always muffled and ended with his mother weeping. Dad was concerned, he held Mothers hand and gave her long worried looks. The kids at school spoke in whispers about him, as if he weren't there. A few of the girls had tears, some of the the boys from gym class just hung their heads.

Roy began to notice that his complexion was pale and waxy. He began to feel weak, like he was sick or overtired. It began the morning after he went fishing with his cousin Dwight. They fished the Powder Point Bridge all morning, without much success. As noon approached, they decided to go to Arthur and Pat's for lunch. They decided to take the little boat over to Saquish and fish the beach there in the afternoon.

Fishing Saquish didn't last long. Roy and Dwight met up with some kids from school and were invited to a party at one of the cottages.They hauled the little boat up on the beach and joined the others.

The party goers had a nice fire on the sand and as the sun began to dip under the horizon, Roy thought he heard someone calling from the water. He could just make out someone in the choppy waves. As he moved closer to the shore, the calls became anxious, pleading. He dove into the water and swam quickly to the little girl. She was going under when he reached her, he almost didn't get a hold of her. Roy brought the girl ashore and began CPR. As the girl came to, Roy felt sharp pains in his chest and fainted.

When Roy woke the next morning, he was at home, in his own bed. He felt a little woozy, but he went down to breakfast. Mother sat at the kitchen table with her Bible in her hands. Dad stared out the window with a blank expression. Neither of them noticed him or spoke to him. There was no breakfast on the table. Roy went to his mother to ask what was wrong. She began to weep uncontrollably. He addressed his father, "Dad, tell me! Tell me what's wrong!" His father left the table in tears. Frustrated, Roy made his way to school.

Once again, the bus driver took no notice of him. Roy's classmates ignored him. No teachers spoke to him. After first period, he stood in the hallway and cried "What have I done? Why won't you speak to me? Can't any of you see me? Am I invisible?"


Please visit Nessa at The Chrysalis Stage for more Tales on Tuesday...
at 9:44 PM
Email ThisBlogThis!Share to TwitterShare to FacebookShare to Pinterest