Address Plaques - More Than a Number... 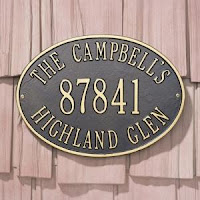 Last night, Tam and I took a ride through a swank new neighborhood down by the canal. The homes were just beautiful. We found one with a fantastic cobblestone driveway and a very interesting stonewall on either side of the cobblestone drive. Each wall had two very stately columns, about six feet high. As we drove past, we saw a workman attaching stunning whitehall address plaques.
I thought the house was grand, but the cobblestone drive and the columns added something special to the entrance of the home. But the address plaque added a very nice touch to the whole place. It put just the right finishing touch on everything.
Tam pulled over to tell the workman we thought the place and especially the columns and the drive were fabulous. We found out that the workman was in fact the homeowner. Mr Brown told us that he was a mason and had been doing stone and brickwork for 40 years. He built the house as a retirement home for he and his wife. Mr Brown was very pleased the we admired his work and asked us in to meet his Mrs and show us around the place.
The drive led us up to the front of the house. It was decorated with colorful mums, asters and other fall plantings. There were two more home address plaques gracing either side of the front door. Mrs Brown came out to welcome us and took us on a tour of the grounds. From the back of the home there was a cute little cobblestone path that led to a quaint little building that looked like a shed. As we approached, I noticed two wall address plaques. One was attached to a post along the path. It read: 143 Lover's Lane. The other was placed on one side of the door to the little shed. This plaque read: Araminty Brown.
We found out that Mrs Brown is quite an accomplished sculptor and Mr Brown built this studio just for her. Inside were many works of art that chronicled the lives of both Mr and Mrs Brown.
The two were deeply in love and likely to remain that way.

at 10:18 PM
Email ThisBlogThis!Share to TwitterShare to FacebookShare to Pinterest